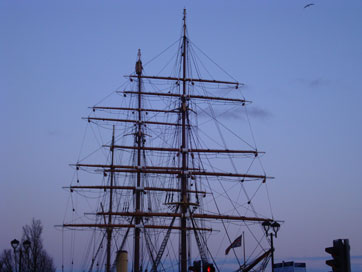 Mist shrouded everything except for the Discovery’s skeletal masts pointing long bony fingers into the sky. It was an omen. He had come to the right place.

There had been so many places since he had last been in Dundee, but he doubted anyone here would connect him with the skinny little lad ejected forcibly from his birthplace, and sent to a borstal far away. They were no longer known as borstals though, secure accommodation, that’s what they called them nowadays. As if the name made any difference. They were still the same brutal lockups they had always been.

Smiling grimly, he pulled his collar up and the brim of his hat forward until only his eyes showed. He turned his back on the glass frontage of the station and shuffled in the direction of the pedestrian bridge.

It was not there. Confused, he stopped and stared. Everything had changed. He did not like change, it unsettled, immobilized him. He turned in a slow circle. The Discovery was behind him, its masts now barely visible. Hazy lights from Tayside House’s tower building pierced the mist, over to his right, and in front of him the dual carriageway – but no pedestrian bridge.

He sent a silent plea to the voice asking him what he should do. But the voice had been silent for some time now, demonstrating its disapproval, because he had acted on his own initiative before he left Newcastle.

The voice had not told him to end the social worker’s life, nor had it instructed him to set fire to her office. But at the time he had been thinking clearly and, knowing he had to vanish, it had seemed sensible to leave no clues to where he had gone.

A cluster of people waited at the edge of the road and, although he did not like crowds, he followed them across both carriageways when the lights changed. 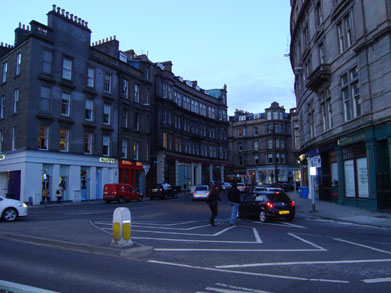 He was in familiar territory now, and his panic subsided as he started to walk up Union Street towards the familiar City Churches at the top.

A faint smell of smoke accompanied the grubby piece of paper and the bottle of pills as he pulled them out of his pocket. On the paper was written the directions to the hostel and all the instructions he needed to start the job the social worker had organized for him. Dumping the pills in the gutter, because he did not need them anymore, he followed the directions on the paper.

The hostel was no different from any other hostel; a grey, unwelcoming building, full of strange noises, strange smells, and even stranger people. He never felt safe in these places but it would have to do until he found something that suited him better.

That had been six months ago; six months of rest and regeneration, since the completion of his last mission in Newcastle. After it was completed the voice had told him to return to his roots in Dundee, but ever since then the voice had remained silent. Despite this, his faith never wavered. He was convinced there must be a reason why the voice had guided him to this place.

Over the last week he had been aware of his increasing restlessness. He was nervy and jumpy, forever fidgeting, unable to remain at peace for more than a few minutes at a time. This was a sure sign that the time was almost here.

As the days passed a fever engulfed him; his body burned and his skin itched. Insects burrowed below his flesh, eating him from the inside. Only one thing could quieten them and that was the completion of his next mission.

But though he continued to wait for instructions, the voice did not speak to him.

The waiting was more than he could bear and in desperation he followed several women, searching for the evil within them. But it soon became obvious to him they were not evil, only silly or misguided.

Then he found this one. She was not silly or misguided. Nor was there any other excuse for the bad things she did. But still he doubted, for although he had followed her every day for the past week and hoped she would be the one, the voice was silent.

Tonight, after leaving the department store from the back entrance in the alley, she walked confidently towards the street, unaware she was being watched.

He waited until she reached the street, then rose from the depths of his secret hiding place and followed her.

When she arrived home her house was empty. No husband waiting tonight. But the voice was silent and had not yet confirmed that she was the chosen one, and without the voice he could not act.

He followed her again when she left the house later that evening. He watched as she visited the man. He heard the argument and saw the despair in the man’s face when she left. And he was there at the end – at the killing time.

And he knew that if it were not for the woman, the man would not be dead.

Surely now the voice would come. It could not fail to see that this woman was evil through and thrAmazonough.

‘Where are you? Where are you?’ The question echoed through his brain although no sound issued from his lips. He did not need to speak aloud for the voice to hear him, for it was tuned in to his thoughts.

As if in answer to his plea the voice responded. ‘The evil that women do cannot be allowed to continue.’ It roared through his head so loudly he had to clamp his hands over his ears.

When the voice quietened and started whispering to him, that was when he knew he had been right to think this woman was the chosen one. And now his mission was clear to him. He had to watch her and prevent her from doing further evil.

He slunk off into the darkness, back to his hiding place. It was time to plan what form his mission would take.