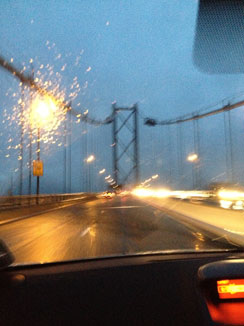 He checked the van for the last time.

He was a few miles from Dundee and would be there in less than half an hour.

The long drive from Manchester had been more exhausting than he had anticipated so he’d pulled off the road and kipped down in the van late last night. But excitement had made sleep impossible and, when he did doze, he’d had glorious wet dreams.

Jade. That’s what she called herself. He wondered if it was her real name or her chat room moniker.

It didn’t matter. What mattered was she was twelve and eager to meet him.

He tucked the rope out of sight beneath the mattress and tested the iron rings embedded in the floor of the van. The small bottle of chloroform nestled in his jacket pocket along with a gauze pad.
Giving a nod of approval he climbed over the back of the seat into the front of the van.

The engine started when he turned the key.

He always kept the van tuned up, knowing how disastrous it would be if he had a breakdown when he was carrying cargo.

The rain, spotting his windscreen, suddenly turned into a downpour and he switched his wipers to their highest speed.

Lorries rumbled past drenching the van with spray, and tailgaters annoyed by his slow speed, flashed their lights at him.

Oblivious to them all he whistled through his teeth while he drove, imagining her reaction when she found out he was not a fourteen year old boy but a man nearing his fortieth birthday. It wouldn’t matter, he would think up a story to con her into coming back to the van with him and the adventure would begin.

They had arranged to meet at the Overgate Centre, the busiest shopping mall in Dundee, and she got there early so she could look him over when he arrived. If he was a fourteen year old boy, she would walk away. But she doubted that. No boy would be willing to come from Manchester to meet a girl. She was convinced he would be a man. 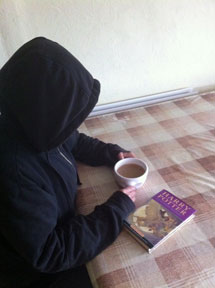 The food court beside the escalators was busy, but she bought a coffee and found a seat against the partition at the back where she would have a clear line of sight to the servery and all the tables.

The coffee scalded her tongue, and the taste and smell turned her stomach. She placed the cup back in the saucer and cradled it in her hands to stop them trembling. Her breathing became forced and she struggled for air. She thought she was going to choke.

Closing her eyes she battled the panic attack and gradually her breathing returned to normal. She could not afford to chicken out now, not after all her preparations. She had rehearsed everything in her mind over and over, and now she did it again. It would work, it had to. Her planning had been impeccable and the time was almost here. But would she be able to follow through? Would she be able to do it?

The multi-storey car park was almost full but he managed to find a secluded corner. Most folks avoided these spaces unless nothing else was available, but he welcomed them. There was less chance of nosey parkers checking him out.

He waited a few minutes while a woman at the other end of the parking level loaded her car and drove off, then he pushed the van door open and got out. A quick look around reassured him it was safe to go and, leaning into the van, he grabbed the Harry Potter book, tucked it under his arm, and headed for the exit leading to the mall.

The lower level was busy with lunch-time shoppers. He hesitated. Crowds made him nervous, but the girls usually picked somewhere like this and he had developed coping mechanisms.
Breathing deeply, he pulled the brim of his baseball cap forward to partially mask his face, focused on a point above the heads of the moving mass of people, and forced himself to join the stream. He ignored the jostling and pushing, the jab of an umbrella, the heel of someone’s shoe digging into his foot, and concentrated on what he would say.

‘Kyle,’ for that was the name he was using, ‘tripped getting out of the van and he’s hurt his foot.’ He could imagine her frown. ‘It’s OK,’ he would say. ‘I’m his dad.’ The frown would lessen but she might still be reluctant. ‘Silly blighter was keen to meet you. He talked me into driving him here. I was going to have a look round Dundee while you two got together, but . . . ’ and here he would shrug and look embarrassed, ‘I didn’t reckon on him being clumsy. What d’you think? D’you want to come to the van to meet him?’ He would wait a few minutes while she considered, and add, ‘I’ll understand if you don’t want to, but he’ll be disappointed.’ Yeah, that should do it. These young girls were gullible. They would believe anything. 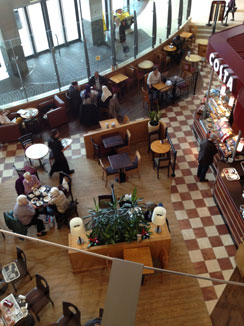 He was easy to spot, and she watched him join the cafeteria queue. She guessed he must be in his forties although he dressed younger and was attractive. Thoughts of what he would want from her flooded her brain. Anger surged through her. She was in danger of losing her self control, so she closed her eyes and breathed deeply. Anger wouldn’t help when it came to doing what she had to do.

His eyes scanned the tables but she had not produced her Harry Potter book yet. He probably thought she hadn’t arrived. She placed her coffee cup on a nearby table and dug the book out of her knapsack when he reached the till.

He finished wrestling with his copy of the book, his wallet and the small tray with teapot, cup, saucer and Danish pastry, and turned to look for a table. She saw his start of recognition when he spotted her book. This was the crucial moment when she would have to convince him she was a young girl. But that was not the only problem. She had to make sure she could not be identified after she completed her task.

CCTV cameras were all over the shopping mall, in the ceiling and high up on the wall. But she had taken precautions. The hoodie she wore masked her face and, as long as she kept it up, the cameras would be unable to show whether she was young or old, male or female.

His tray wobbled as he picked his way through the tables. A tall, thin man with a hesitant smile, wearing grubby jeans and denim jacket, and a cap with its brim pulled low over his eyes.
‘Jade?’ His voice was pleasant and reassuring.

She pulled her hood closer to her face. ‘Go away. I don’t know you.’

He placed his tray on the table. ‘Kyle sent me.’

‘Why would Kyle send you? Why didn’t he come himself?’

‘He did come. But he had an accident getting out of the van. The silly sod tripped up over his own big feet and he’s sprained his ankle.’

‘I don’t believe you.’ It wouldn’t do to make it too easy for him or he would suspect something.

‘Why would he bring his dad with him?’

‘He couldn’t drive himself from Manchester, could he? He’s not old enough for a licence.’

‘I suppose.’ She made her voice sound grudging, as if she was starting to believe him.

He sat down and poured his tea. ‘Can I get you something? Coke maybe? And then I’ll take you to Kyle.’

As soon as he joined the queue at the counter she tipped the pill into his cup then held her breath until she was sure the tea wasn’t going to turn blue. But it was all right, it was just as her supplier had said. The pill was one of the older ones produced before they added the blue dye to cut down on date rapes.

‘D’you always wear your hood up?’ He set the glass of coke in front of her and sat down.

‘Some of my mum’s pals might be shopping here,’ she mumbled. ‘If they see me they’ll tell my mum I’ve bunked off school.’

Luckily he did not push it and she knew she was one step nearer her goal. She felt him watching her and she lowered her head, pretending to drink the coke.

‘It’s a pity Kyle couldn’t meet you here. I bet he’s sitting in the van feeling sorry for himself.’

‘If you say so.’ She could not afford to agree to go with him yet. He hadn’t drunk his tea.

‘He was keen to come here. I couldn’t refuse to drive him.’ He took a bite of his Danish pastry.

‘Yeah,’ she mumbled, willing him to drink the tea. She would never be able to do the next bit unless the drug started to work on him. He was too big for her to overpower without it.

‘Please say you’ll come back to the van with me. Kyle will be disappointed if he has to go home without seeing you.’ He lifted the cup and swallowed.

Ten minutes would be sufficient, she thought. And by the time they walked to the van he would be more than ready for the final injection. 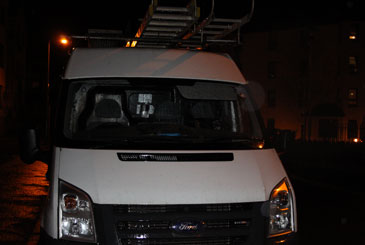 He smiled at her. She had taken the bait. Pity he couldn’t see her face, but once he got her back to the van he would see far more than that. He was euphoric, thinking what he would do to her, the gifts he would give her. She would never be the same again.

He watched her lift her glass and put it on the tray. ‘You ready to go now?’

‘Yeah,’ she said, stuffing the Harry Potter book into her knapsack and slinging it over her shoulder. ‘Let’s go.’

The crowds in the mall had increased but they did not bother him. He swayed with them, walking on air. He was more relaxed than he had been for a long time.

He was vaguely aware of her holding onto his arm. ‘Nice,’ he said, patting it. ‘Kyle’s going to love you.’

He floated out of the mall into the parking garage. It seemed to be shimmering and swaying.

‘Where’s your van parked?’ Her voice came to him from a distance.

‘We’re here,’ she said, although he had no recollection of moving.

He blinked, refocused and pointed.

Her hands searching his pockets sent delicious shivers through him.

‘Wow,’ he heard her say. ‘This is better than I imagined.’

The mattress felt like a cloud, the ropes like silk scarves, and the injection sent him floating to a higher plane.