Books » Death of a Doxy

Death of a Doxy - Chapter One

Death of a Doxy 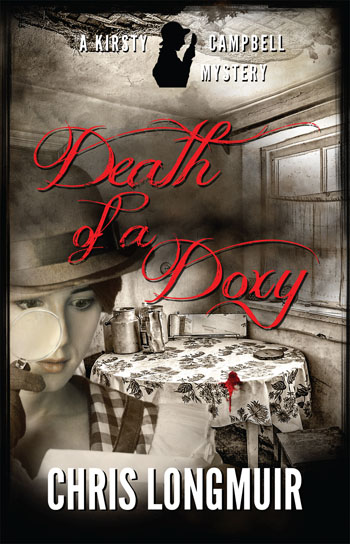 Splotches of blood combined with other stains created a grim kaleidoscope of colour on the faded blue mattress.

He had meant to save her, not kill her. But her depravity overwhelmed him when she mocked him and laughed in his face.

Bile burned his throat and he leaned over the box sink in front of the window waiting for the pain to pass. Outside, footsteps on the landing caused him to draw back and he slid into a shadowy corner of the room, his hand tightening on the poker which he still clutched. When the sound disappeared he returned to the sink, turned the tap, bent over, and swilled water around his mouth. The burning sensation faded. He closed his eyes and leaned his head on the cool glass of the window in the vain hope the scene behind him would disappear and everything would be the same as when he entered the room less than half an hour ago.

An image of her flashed through his mind. Innocent blue eyes; now so knowing. Hair, golden as daffodils on a spring morning, streaming behind her in the breeze; now dull and lank. Skin, translucent in the sunshine; now caked in thick face paint.

Where had that innocent young girl gone?

He opened his eyes and turned to survey the room. A dingy place containing nothing more than a rickety wardrobe, a bed, one chair, and a table holding a guttering oil lamp. The last embers of a fire glowed in the black grate of the fireplace which spilled ash over the floor. And on the mantelpiece, a candle dripped wax into a saucer.

But the thing that held his eyes more than anything else was the body which sprawled on the mattress before him, beaten and bloodied, and no longer recognizable as the girl he remembered. His hand loosened on the poker which clattered onto the wooden floorboards to lie in a widening pool of blood.

Unaware he had been holding his breath, it now whispered out from between his lips, and the anger that consumed him was replaced by exhilaration rushing through his body, reviving him, exciting him.

He had saved her, although not in the way he intended. He could see now. This way was better. It was the only way to eradicate the depraved life she led. But he couldn’t leave her like this, with her clothing in disarray. No, that wouldn’t do. He would make her respectable, lay her out before her body stiffened, and arrange her dress to provide her with a modesty she hadn’t experienced for a long time.

Her limbs moved easily under his tender hands. He rolled her onto her back and straightened her legs, smoothing the dress over them. Next, he crossed her hands over her chest and arranged her blood-soaked hair over her shoulders.

Pleased with his work he carried the poker to the sink and rinsed her blood from it. Then, taking one last look at the scene in front of him, he left the room, closing and locking the door behind him.

At the bottom of the stairs, he sidled around the final corner and hurried across the backlands behind the tenement. This was an area of grass, weeds and rubbish which serviced the tenements that bordered it. The place where the tenants kept their bins and hung their washing on ropes to dry. He slipped through a close at the other side of this waste ground, opposite the building he’d left, and emerged onto the street. After taking a circuitous route and keeping to side streets he eventually reached Magdalen Green. From there it was a short walk to where the River Tay flowed to meet the North Sea. With one last look around to make sure no one observed him, he raised his arm and threw the poker into the water.

He smiled to himself as he walked homeward. His job was done.