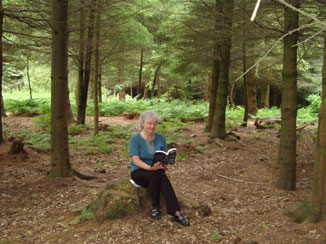 Last night, when the dark was at its blackest, something had nipped at her fingers. She’d wiggled them and it had moved away, slithering into the unknown, no doubt waiting for another opportunity.

It was day now. She could tell because the dark had lightened to a greyish gloom.

Her head felt woozy, like it did when she’d had too much vodka. Her eyes were playing tricks on her. She fixed her gaze on the leafy canopy overhead. The branches swayed and rustled, bending towards her, clutching and reaching to pull her into their embrace.

At first she’d thought he would come back, that this was just some kinky game he was playing. But this was no game.

Left alone, tied to the tree, it hadn’t been long before the glacial cold air had bitten into the core of her. Violent shivers consumed her body but there was nothing she could do to stop them. She closed her eyes, hoping for release from the icy pain. Then, during the night, she thought she’d been back in City Square celebrating the New Year. The bells had been ringing, the crowds singing and bottles shared. Now it was day and she was feeling warmer.

She desperately needed to sleep but fought against it. She struggled, pulling and pushing her wrists in a vain attempt to break free. But it was hopeless. Each time she moved her arms the bonds seared into her flesh, and pain jolted up her arms. Her shoulders, savagely pulled into a backwards embrace of the tree, throbbed. Her mouth itched under the sticky tape. Her feet were free, but it made no difference to her predicament. She could stand up, sliding her arms up the back of the tree, and sit down again – if she could bear the agony of the bark scraping the length of her arms and the wrenching pain in her shoulders – but there was no way she could free herself.

As the day lengthened and dusk gathered round the trees, her body sagged and her chin drooped. She no longer felt the cold and sleep claimed her. It was a restless sleep, disturbed by the strange rustlings in the undergrowth and the sensation of being watched.

The dark hid her companions, her sisters of the forest, silent, sleeping, decomposing slowly under a fine blanket of snowflakes.

The scurrying creatures of the forest were not the only ones who watched. He had returned. It was important for him to be there at the final moment, for he had one last task before she died or her soul would not be purified and saved. Now that the screaming was past it was time to remove the tape from her mouth, so that her soul would soar free with her last breath.